Chief Of Air Staff Blows Hot, Says Terrorists Will Be Brought To Their Knees

Nigeria’s Chief of Air Staff, Air Marshal Oladayo Amao has expressed optimism that the military will soon crush terrorists, bandits and others responsible for insecurity in the country.

The Air Chief expressed the opinion when he played host to the Chairman, Nigerians in Diaspora Commission (NIDCOM), Hon Abike Dabiri-Erewa, at the Nigerian Airforce Headquarters in Abuja.

According to Amao, the military has already keyed into harnessing the expertise of Nigerians in the diaspora to combat terrorists in the country and will continue to seek more ways to make the relationship continue to blossom.

Dabiri-Erewa and Amao met ahead of the proposed Diaspora Defence and Security Conference. 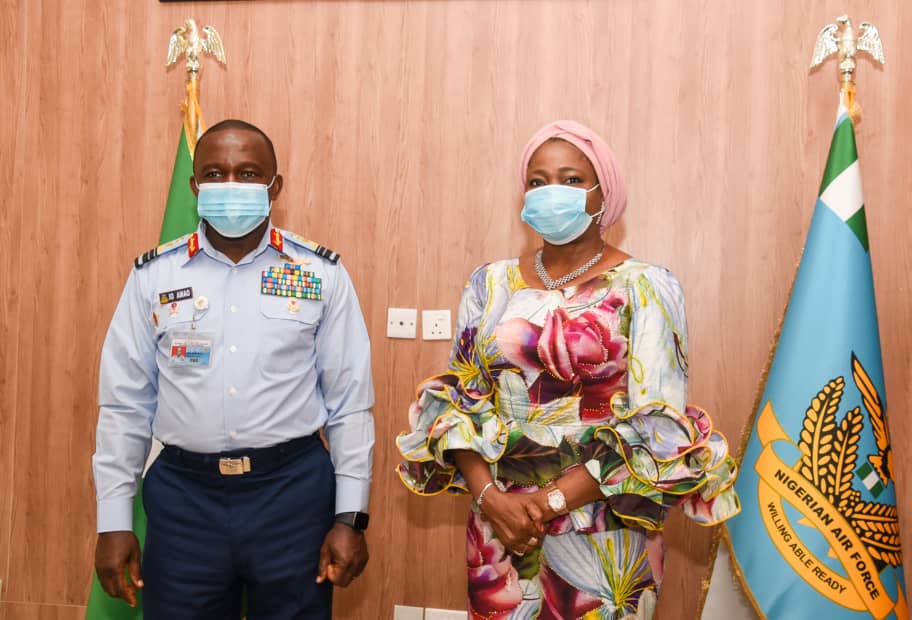 A statement on Friday by the NIDCOM Media, Public Relations and Protocol Unit which was signed by Gabriel Odu and contained details of what the two officials discussed reads: “Air Marshal Oladayo Amao believes that with the professional competence of the air servicemen and women, and well-boosted morale, the terrorists and their kind will be brought to their knees.

“CAS said the NAF is willing to collaborate with Nigerian Professionals in diaspora in relevant fields as it is imperative to tap into the enormous skills of Nigerians all over the world particularly in the area of technology transfer.

“Air Marshal Amao also commended the NIDCOM boss for her passionate and relentless desire to see that the Nigerian diaspora with such enormous resources, skills, talents and global exposure is leveraged for National Development.

“Amao further assured of maximum support to ensure that Airforce Officers get the best professional training abroad, including those provided by Nigerian diaspora professionals in that field.

“The NIDCOM boss used the ambience of the visit to extend her condolences to the Nigerian Airforce on the loss of officers and men in the course of tackling the security challenges in the country.

“Hon Abike Dabiri-Erewa also applauded the Nigerian Airforce for their intervention in bringing back stranded Nigerians in the Diaspora, particularly from neighbouring African countries.”

Meanwhile, the Nigerian Correctional Service (NCoS), Edo State Command, has revealed how security operatives foiled an attempted jailbreak by inmates at its facility in Ubiaja.

A statement on Friday by the state Public Relations Officer, Aminu Suleman, said that the incident occurred on Wednesday following a riot after the inmates refused to return to their cells.

He disclosed that inmates attempted the jailbreak after they heard about the incidents at the correctional facilities in Oko and Benin in Edo, as well as the recent attack on the custodial centre in Owerri, the Imo State capital.

Suleiman noted that the riot by the inmates led to violence during which cells, admin blocks, and medical office were damaged, while the inmates bored holes on the perimeter fence in a bid to escape from custody.

Suleman, however, said the jailbreak was foiled by armed personnel of the correctional service, police, Nigerian Army, Nigeria Security and Civil Defence Corps (NSCDC), and Department of State Services (DSS).